I guess most of you already know that the word “mythology” is a Greek composed term of μῦθος, which means “story” or “tale”; and λόγος, that is, “word”, study” or “science”. So, mythology is the science that explores the stories that have been woven by a certain civilization in order to give an explanation to the natural phenomena, to their society’s historical events or even to give an answer to their human concerns.

As far as the Greeks are concerned, these stories were a sort of encyclopaedia during their pre-literate era. That means they didn’t believe those to be fool stories: not only wouldn’t they take them for granted, but they would consider them to be an example for their common values.They would actually believe that, for instance, the seasons of the year had been created as a result of Persephone’s rape, or would they even attribute the thunderbolt to be a Zeus’ work, as well as earthquakes and rough waters to be Poseidon‘s will. The heroes’ behaviour and their deeds, which had taken place into a distant past during big wars such as The Trojan War, would as well be taken as an example for the whole community. Let’s take into account two of the most important European literary works: The Iliad and The Odyssey, and the topics they talk about. Even if we don’t believe in mythology (of course! how many of you readers do believe that Greek mythology stories are actually true?), we must recognise that these works have influenced us enormously and that’s why they have become classics. 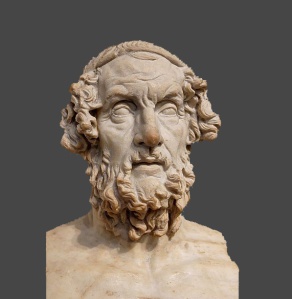 As a result, during the pre-literate period, Greeks created a bunch of complex stories concerning their historical events which were mingled with divine intervention in order to make them more appealing to the society that listened to them. There were specialized poets, the aoidoi, that played a crucial role in terms of transmitting this mythology.They were in charge of gathering this conventional wisdom and converting it into beautiful songs that were meant to be sung before a selected audience. In fact, the word aoidos comes from the Greek term ᾀιδῶ, which means “to sing”. These  aoidoi would actually have to learn by heart thousands of verses using a wide range of techniques that have enormously influenced into epic literature features we can easily recognise.

Later on, Rhapsodes were first-born with the adoption of the Phoenician alphabet. Accordingly, poets could eventually recreate those poems that had been orally transmitted, by writing and by improving them. As a result, we have inherited two chiefly worldwide recognized poems which are The Iliad and The Odyssey, both written by Homer, who is traditionally believed to be the first Greek rhapsode.

Rhapsode. They used to recite their poems setting the beat with their club.

Nevertheless, it is no wonder that the Greeks gradually started changing their mindset about these fabulous beliefs. Likewise, more ground was put between mythos and logos by the first philosophers, the physikoi (term that etymologically relates to the word physis, “nature”) or the presocrats, who sought natural explanations for phenomena, since myths were no longer reliable to them.

Despite this mind-shift, myths were still an important part of Greek and Roman cultural and religious legacy. Writers would often refer to those stories to fulfil their works with erudition: let’s take a look, for instance, at works like the lyric poetry in the ancient Greece, the Hesiod’s Theogony; or the legacy the Romans kept in their literacy works such as the Ovid’s Metamorphoseon, The Virgil’s Aeneid, Catullus Carmina, and so on and so forth. Those are all good examples of preserving this huge amount of this mythological legacy in the most sublime manner.

So, to sum up, mythology has left a huge artistic legacy that we must preserve. It takes lots of effort sometimes to interpret a work of art without having it  conceptualised in a mythological basis! Let’s make a quick test: could you recognise which scene represented below these lines? If you do, then keep on learning. If you don’t, don’t take this too personally! Just keep on being curious!

(Answer: This work of art refers to the myth of Apollo and Daphne. To summarise: Apollo gets in love of Daphne desperately and she refuses him. Then, the nymph, after being so tired of being persecuted, asks his father Zeus to deal with the problem. Then he decides to convert her into a laurel tree.)